I'm in a bit of a rush so I have to pop out (and my list is looooong!), so feel free to carry on without me.

Be great to see some pics as well!

2001 Rane TTM56 fantastic mixer, finally found one I liked but soon I was dreaming of 3 decks.

2006 Rane Empath (3 deck) love this mixer, so nice to use. cant see me replacing it.
mine is pimped with silver knobs bought from Rane :D

Ending on a high with:

Ecler HAK310 (it has all i need and the xfader is perfect)
-> though i should probably have paid the extra for the XLR'd 360... i still love it to bits!

You've done well to have a mixer for 9 years, mate! That'd be an all-time record for me! Haha.

Saying that it is Rane, after all. Ever had any problems with it?
Top 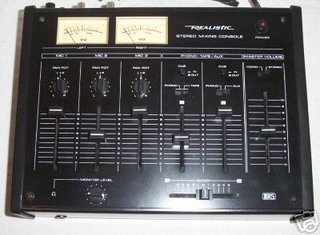 No Restless both of my Ranes have been good as gold (sold the 56 to pay for the Empath). Hoping it will go on forever, got a few spares for it just in case. It's a pretty basic mixer for the price it was so there's not much to go wrong. Was forever replacing faders on the other two!
Top

RIP to the following:

Decent, but the sampler broke within 2 weeks :(

Agree with Jedi about the fader, but replacing it was a total nightmare! 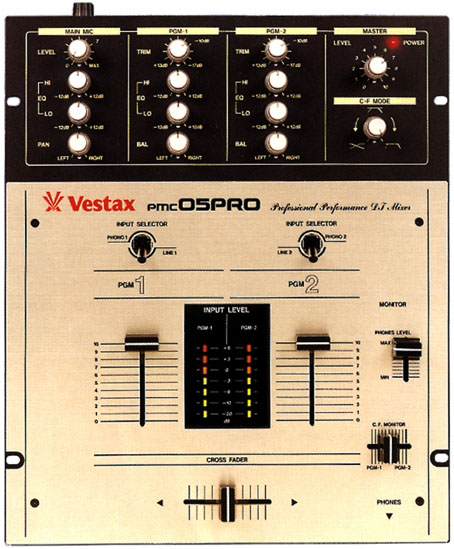 Never really got on with this - preferred My Technics.

Awesome in every way.
Top

I do love those Rane mixers (all of those listed above tbh) - never owned one.. but they are stunning & the xfader is proper.

Lien - that Realistic mixer pic u posted has brought back loads of memories too!
Top

@ easyflow - That Rane mixer looks the tits, son! Marks out of 10? Ever had a problem with it?
Top

I cannot recommend RANE enough, there are simply the best, and nothing touches them for build quality.

BITD they were very expensive, and lots of ppl were happy with Soundlab, and Gemmini...

I've still got a box of RANE replacements and accessories, I've not used over the years too!

I loved the MM8, and its various upgrades over the years. Still got my MM8z and I can honestly say its been awesome, taken a battering from being uses out, so many other DJ's have hammered it.

MP24 was the main mixer I used, and was great also for 3 and even 4 deck crazy times! Only thing was, it wasn't just 19 i9nch rack, but connectors were on bottom, not rear, so couldn't be used in a coffin case.

I remember back in late 90's there were 3 or 4 of them in a row in MOS, which seemed crazy!

That Technics mixer was everywhere approx 98-04, and rightly so, as it ticked all the boxes for the price. Crossfader was that gr8, and crackled easily, but replacing had to be done in the day, not on the fly, as the whole thing had to be taken apart - and spare faders were actually inside! You'd be surprised how many ppl didn't know they had a spare inside!

bedroom DJ's all seemed to have GM25, DSM15, Numark... Mid 90's so many brands incorporated samplers - and they were awful!

Then there were those dreaded -kill switches'

I had a cool Formula Sound mixer BITD and that was really good condition. Oh, and an Eclar Mac - which was nice, but delicate...

Funny how I tried so many mixers, and loved their evolution, but never found a turntable I preferred to the 1200/1210. Never got on with those Vestax decks...

do you remember approx 10 years ago, everywhere had those damn Allen and Heath, which were good, but too many bells and whistles, which meant DJ's were able to 'play' far too much, and made for some very cringe worthy sets, with pointless filtering etc.

I also had a Vestax rotary mixer, which was actually rather good, then also a Bozak, which I then got rid of when they were going for a song...
Top

Mentioning "Bells & Whistles" in the same sentence as A&H is hilarious (all they had was a filter, no effects at all). They are basic as hell, and were for a good 10+ years (2000-2010). They were also the standard until Pioneer (now THEY are the Bells & Whistles brand) brought out the 800. It's been game over for A&H ever since!

Also, A&H are phenomenally well built. "Tanks" doesn't come close to describing them. And they sound fabulous.
They have to be the Rolls-Royce of mixers.

Formula Sound are awesome, too.

Urei are another top brand, very overlooked on this side of the pond.
Top

Sold my Bozak to get a Urei... the house music scene wanted rotary so badly, Urei reinvented itself, selling the same design as 20 years previous...

Seriously those Allen and Heath I'm talking about ain't your nice hand built in Cornwall, that you found in studios etc, I mean the ones which you started to see in clubs and even bedrooms, the quality did not match the prices, or what their name stood for.

Early Allen and Heath had gr8 components, but those later ones were awful, and I still stand by my 'bells..." comment, as every mixer was far too 'busy' and had at least twice the number of knobs are was needed. Sure they didn't have Korg style 3D phase boards, but all those endless EQ and filters, meant too much for DJs to play with, and hence ruined so many sets.

Sadly, Allen and Heath weren't doing well, so went into the DJ market, and pretty much owned it in EU for approx 10 years. Rane was actually pushed out which was sad - I remember it wasn't so easy to obtain spares, and I think it was BOSE who distributed in the UK BITD...

I guess its what kids want now though - we wanted build quality, but now kids want as many flashing LEDs as possible, and even stupid grafitti design top-plates.