The whole 'Retro' thing is massive these days (it can be like living in 1995 at times!) in terms of fashion and music, but how has this affected what we know as Hardcore and what is commonly known as Oldskool?

Club nights - How are the likes of Raindance and the other big brands doing? Are they still as busy as ever? How about the Slammin Vinyl raves, are they still busy? Smaller club nights, are there any worth talking about?

Fantazia seem to still be packing them in. There's plenty of Hacienda reunions going on which are awesome. Dreamscape, although they had a setback, have apparently put on some excellent smaller parties. Fusion are back...

So, what's your take on the state of the scene in 2014? Or have you retired and moved on?
Top

Not in a goos state IMO, it's lost its edge. The small monopoly of events are trying to be 'cool' by pushing their 'brands' and encouraging DJs to make stupid videos to put on Facebook etc, it's more like the X Factor these days and seems to have nothing to do with the music any more. I've listened to a couple of the sets from Moondance last month and they're f****ing terrible, if sets like that is what ravers want these days then it's not the underground scene we all loved any more.

There are of course a select few decent events still, as above Labrynth is pretty good, I went to the one at The Garage a few months back. Rupture is wicked too, about the best music you'll hear. And of course Riverdance

i think there's an inevitable separation between "rave" and the music. rave (as in the big events, the whole experience) by its nature is about more than just the music, so the music will always go with trends of the time, even for oldskool. (also increasing the same for oldskool hardcore in europe too, i notice!) whereas the music itself becomes a more niche thing - and so is always likely to be in small events for more discerning types. i don't mean that to disparage the former either, each has its place and probably better that there is that separation rather than something trying to keep both audiences happy together.
Top

Adam Timeless
The Messiah of the 21st Century

c_funk wrote:im going to the hacienda night in kentish town in october for a stag do so will let ya know

Cheers for the heads up. Reckon I am gonna give this a bash. Went to the last one they did in London - June last year at The Coronet which was wicked! Quite fancy seeing the Mondays live show and hearing some classic House. Kentish Town Forum is wicked venue, saw Cypress Hill live there a couple of years ago and was pretty impressed with the layout/sound - but not the bar prices though!

c_funk wrote:im going to the hacienda night in kentish town in october for a stag do so will let ya know

Cheers for the heads up. Reckon I am gonna give this a bash. Went to the last one they did in London - June last year at The Coronet which was wicked! Quite fancy seeing the Mondays live show and hearing some classic House. Kentish Town Forum is wicked venue, saw Cypress Hill live there a couple of years ago and was pretty impressed with the layout/sound - but not the bar prices though!

nice one ad its been a while, i might see ya there then!
n
Top

What, everything? Buying tunes, Mixing, Attending events? To be honest, I'm kind of in the same boat to be honest.

Amaze's me how Bunter became so big in this scene. Ok, he was a resident at Labyrinth, but he NEVER appeared on the proper events back in the day like Obsession, Fantazia, Raindance, Perception, Mythology, Starlight, Quest, Eclipse etc (not that I know of anyway), and now he is like the 'go to guy' along with Slipmatt.

I know Billy was around and he was a big name in the hardcore scene, but it seems like he blew up in 2005 after that Skelter album... He was no way on the same level in popularity as Easygroove, Grooverider, Micky Finn, Ellis Dee, Sy, Ratty, Slipmatt etc. He may have done a few big raves in London, but I always viewed him (in that era) as a early doors DJ/Room 2 DJ. And now he does D&B sets! Even that scene isn't safe! Hahaha (only jesting).

Anyway, I feel the same as you. It's nothing but saturation, overkill and a monopolisation of the scene.

I'm going to the Fantazia event next month and the Fusion event in November (I haven't been out since NYE 2012) and I might just call it all off after this year as well.

Personally I'm loving it at the moment! Agree on the Slipmatt / Bunter thing (what bugs me is seeing the SLs going unused while he mixes on his shitty digital setup) but it doesnt bother me my love for the music is much bigger than caring about some individuals in the scene. Old skool Hardcore for me these days consists of spending way too much on discogs snapping up my wants and going to old skool nights when DJs i like are in town. I'm also buying new DnB on vinyl, cutting some vinyl dubs of digital only tracks that i like and going to a lot of nights (where the scene is in great shape imo) and occasionally some minimal techno / tech house and a few other styles. Recently Ive really felt like there is a new generation (two generations on from ours!) who are using digital technology to push things forward, in some ways good, others not so. Still contemplating purchasing Serato, but at the same time Im quite enjoying getting tracks cut and feeling like I'm the only one who has it on wax. I'm sure it'll eventually reach a tipping point where the amount of great digi only tracks means that becomes prohibitively expensive, but its certainly not yet. Thankfully there are lot of people in DnB that have love and dedication for vinyl and all the best stuff makes it to wax. 3-500 copy pressings are selling out in weeks and some records are selling for £30-40 on discogs within months!

Got high hopes for this event in November, lineup looks fantastic (on paper anyway!) hope theres not too much happy hardcore and they dig deep. 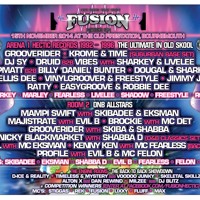 Overall I'm pretty positive about it all, nothing better to do is there?!
Top

Hmm, I dunno it's easy to snipe. I think Slipmatt and Bunter do a fair enough job of catering for a particular part of the market and in pushing the oldskool sound to a more mass-market audience.

There's certainly nothing stopping anyone promoting more niche and underground nights. It's just that there isn't a whole lot of money in it!
Top

Personally loving it - we have had a great year - Fabric, Dourfest, Boomtown, Fantazia, Poland, Ireland etc etc...and getting asked by Randall to play was a highlight. If you missed John from Foul Plays set at Stepback, you missed a monumental set by all accounts.
I am not getting into the digital / vinyl debate. Pointless. I can play records, I can use a controller, I hated CDJ's - it dont bother me....It's all music
I haven't been this eager to listen to music since the early 90's - new takes on old stuff, new hardcore sounds, future jungle, 140 - the list is endless and so available now we have the interweb.
Sure - events will get smaller but I am 100% positive you will always find a bit of old skool at festivals etc etc. Multi genre events like Bangface are the way. Where else can you listen to Jeff Mills in one room, Congo Natty in the other then Hellfish in another room,
And here is something to consider - we are noticing more 20 somethings appreciating it and talking to us at gigs. Bored of DnB and dubstep.........discovering breakbeat.

Good to hear that Si.


si 2 bad wrote: I am not getting into the digital / vinyl debate. Pointless. I can play records, I can use a controller, I hated CDJ's - it dont bother me....It's all music

Dont blame ya mate. Maybe I was a bit out of line with my post, if I was in his position playing week in, week out would I want to be dragging my 22 year old vinyl around the world, letting it get all battered and worn out by badly set up turntables? Probably not. Its just the stage show I miss, using Serato is fine by me, at least it gives the impression of a real DJ doing his thing whereas someone at a controller just looks like some disco dave playing no scrubs in a wine bar. But as you say, its pointless arguing debating it, that wasnt my intention I've got my opinion on the matter but each to their own! I cant talk anyway I've played at a small event on an iPhone before :D
Top

I think there's still plenty of nights to enjoy, you just have to be selective imo. I maybe go to one every 6 weeks but try to choose wisely- as already mentioned the best old skool event is for me riverdance- have been going to this for over 10 years and we look forward to it all year also convenient that it falls on my birthday every year :) also that fusion looks wicked and I went to the first one earlier in the year and the atmosphere and tunes were amazing, the DJs really came through with proper selection, I will be at the November one for sure! Have been to some amazing freeparties in the last two years as well, some great old skool shows on the radio to listen to- bunters and dugs shows I love to listen to, there's still a good scene and good events but you have to look a bit deeper than moondance and raindance. Also if you like old skool jungle then checkout junglemania at the coronet, last one was amazing!
Top

I've been to quite a few over the past yr or so. I admit that nights like MoonDance are very commercial and a lot of the DJ's dont think about their sets at all - but at the same time the place is packed. On the otherside, when moondance was at Union (vauxhall) all the DJ's played alot of underground stuff.

Anyways, to me the smaller the event, the better the selection - You just have to pick and choose - if you go 'large' then expect more anthems.

I agree with the whole decks v tech thing - to me, it looks like less skill (but thats a whole new topic!)